Get TEFL Certified in Indonesia
Take our 4-week TEFL/TESOL in-class course in Surabaya
Being located in the 'Ring of Fire' and in close proximity to world-class beaches, you will find yourself in a tropical paradise while taking your TEFL course with us in Indonesia. More info
Explore Surabaya!
Our TEFL course centre in Indonesia is located in Surabaya, the second largest city on the exotic island of Java.
Surabaya provides a wide variety of social and cultural opportunities. It has tasty Indonesian cuisine, great water sport activities, a vibrant nightlife and countless paths and trails for exploring the national parks and volcanoes in the area. More info
The 8 Best Countries in Asia for Teaching English Abroad
Here are the best countries in Asia to teach English as a foreign language in 2018.
Asia is a premier destination for English teachers due to the ease of travel between countries, good salaries, extra benefits (free flights! free housing!) and the abundance of available jobs. More info
STARTBODY

The Republic of Indonesia consists of a mind-boggling 17,508 islands and has a population of approximately 230 million people, a figure that makes it the fourth most populated country in the world. However, despite the huge population, Indonesia still has vast areas of wilderness that are home to some of the most diverse flora and fauna on the planet.

Indonesia touches both the Pacific Ocean and the Indian Ocean while also bridging the continents of Australasia and Asia. The Indonesian Archipelago stretches for over 5,000km and is located entirely in the tropics, on both sides of the equator. The country is culturally and linguistically diverse, with around 500 languages and dialects spoken by its many different ethnic groups. Indonesia is also an incredibly beautiful country with many stunning beaches and islands, active volcanoes and thick, dense jungles.

For many, the main attraction of Indonesia is the lifestyle and customs of its people. For those that decide to take a TEFL course in Indonesia, you will experience a colourful, dynamic country with a huge variety of experiences and sights to enjoy. Also, there is never a bad time to visit the country as its climate is tropical year round, with hot and humid weather inland that is often cooled by pleasant breezes on the coast or cooler air in the mountainous regions.

The ITTT course in Indonesia is located in Surabaya, Indonesia's second largest city situated on the eastern side of the island of Java. Although Surabaya is a large and highly populous city, it is also a very important centre of education with one of the largest student communities in Indonesia. 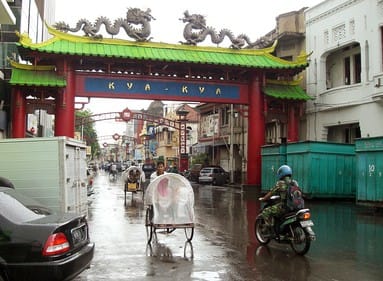 In terms of post-course employment opportunities, Indonesia ranks high for its demand for qualified EFL teachers and you are all but guaranteed a teaching position after the course. Salaries and working conditions are generous by local standards so it is a great place to gain some valuable TEFL experience, while also earning enough income to live comfortably. In addition, Indonesia is also perfectly situated to access TEFL job opportunities throughout Asia and further afield.

The stunning beauty of the country, the relaxed lifestyle, the low cost of living and the numerous post-course employment opportunities are just some of the attractive reasons for taking your TEFL course in Indonesia with ITTT.